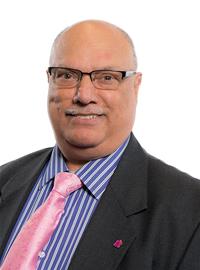 How many Commission staff vacancies in 2019 were filled by applicants from ethnic minority communities?

How many Commission staff vacancies were filled by applicants from ethnic minority communities in the first quarter of 2020?

What is the total amount of grant money made available by The Development Bank of Wales to support business in Wales from 1 January 2020 to 1 April 2020?

What percentage of the grant money made available to business in Wales by the Development Bank of Wales between 1 January 2020 and 1 April 2020 was made to firms run by members of ethnic...

What is the Welsh Government doing to improve outcomes for sufferers of ovarian cancer in Wales?

What advice is Welsh Government giving to those GP surgeries and communities where coronavirus video consultations are not possible due to a lack of broadband connectivity?

Mohammad Asghar (Oscar) was a Member of the Senedd between May 2007 and June 2020. This was his biography at the time of his death.

Oscar takes great interest and pride in promoting business and enterprise on a local, national and international scale. Consequently he relishes his participation in the CPA (The Commonwealth Parliamentary Association), where Oscar has developed firm relations with various countries across the commonwealth to strengthen international relations with Wales.

His interests outside politics include cricket, athletics and badminton. He also holds a Pilot’s licence and is an accountant by profession.

Born in Peshawar in Pakistan, Oscar gained a BA in Political Science from Peshawar University. He moved to London and completed an MBA before moving to Wales in order to complete a course in accountancy in Newport. He is fluent in Urdu, Hindi and Punjabi.

He’s married to Firdaus, a doctor and the first Muslim Mayoress in the UK. They have a daughter, Natasha.

Oscar is a very keen sportsman and has always encouraged participation in sports for all ages. As someone who ran with the Olympic torch in 1964, he is delighted whenever sporting events unite the nation through rugby, football, athletics and cricket, and he has always campaigned for Wales to have its own cricket team.

Oscar began his career working for a firm of chartered accountants in Newport. He then became a principal of his own accountancy firm and held various Directorial positions in other businesses before he entered politics.

He is also a qualified Pilot.

Oscar became Wales’s first Muslim councillor, representing Victoria ward on Newport City Council in 2004. He came to prominence after being elected to the National Assembly for Wales in 2007, and again in 2011 and 2016. He is best known for being the first ethnic minority and Muslim member of the Assembly and he is extremely proud of his background and journey