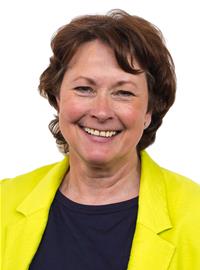 Will the Minister confirm whether there are plans to increase the funding of health and care research Wales and, if so, by how much?

What plans does the Welsh Government have to support businesses as lockdown restrictions are eased?

Will the Minister provide a breakdown of the number of women waiting over two weeks for their cervical smear test as of 16 March 2021, by week?

Will the Minister outline what assistance the 2021-22 budget is providing for pain management clinics and services in Wales?

Has the Minister considered using independent pain management clinics to assist with the current patient backlog?

Will the Minister provide average wait times for smear test results in January 2020 and January 2021?

Angela Burns was a Member of the National Assembly for Wales between Mai 2007 and April 2021. This was her biography at the time she left.

Angela loves the outdoors and enjoys riding, sailing and walking her dogs. Any spare time she has is spent with her family.

Angela was educated in England and is from a military family which resulted in her being brought up in a number of countries. She is married to Stuart and they have two young children.

Prior to entering politics, Angela worked in bBusiness for a number of large companies including Waitrose, Thorn EMI and Asda. She went on to become a company director before moving to Pembrokeshire with her husband and two young daughters.

Angela was first elected to the Assembly in 2007 with a majority of under 100. She served as Shadow Environment Minister, Shadow Transport Minister and Shadow Finance Minister in the Third Assembly as well as chairing the Assembly’s Finance Committee.

Angela was re-elected with an increased majority in 2011 and, for the duration of the Fourth Assembly, served as Shadow Education Minister; sat on the Children, Young People and Education Committee, and was appointed as one of the Assembly Commissioners which occasionally led to her deputising for the Presiding Officer in the Chamber.

May 2016 saw Angela once again increase her majority in Carmarthen West and South Pembrokeshire and, on return to the Assembly, she was appointed as a member of the Assembly’s Health and Social Care Committee. She was also given the role of the Welsh Conservative’s spokesperson on Health and Social Services.