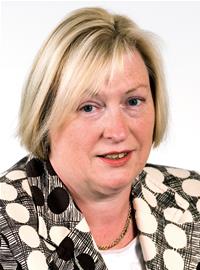 Edwina Hart was a Member of the National Assembly for Wales between May 1999 and April 2016. This was her biography at the time she left.

Edwina Hart was born and raised in Gowerton, Swansea, where she lives with her husband and daughter.

She was the first female president of the banking union BIFU (now part of Unite), and went on to chair the Wales TUC. Edwina has served as a member of the Broadcasting Council for Wales, the Wales Millennium Centre, the Employment Appeal Tribunal and the South Wales West Economic Forum. She was also a non-executive director of ‘Chwarae Teg’ - an organisation which promotes the role of women in the workplace.

Edwina was awarded an MBE in 1998 for services to the trade union movement.

Edwina has been Gower’s Assembly Member since the first Assembly election in 1999. Having served as the Assembly’s first Finance Secretary, in 2000 the role was changed to include responsibility for local government, so she became Minister for Finance and Local Government.

Her main political interests are equal opportunities and economic development.