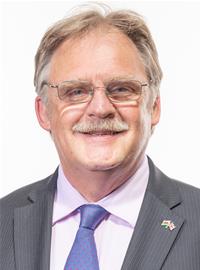 What assistance does the Welsh Government provide for local football clubs in Wales to purchase new playing surfaces such as 3G?

What assistance is available for the purchase and installation of community public access defibrillators?

Will the Minister confirm that the Welsh Government will commission an independent, external assessment of the progress that has been made against the various mental health reviews over r...

What steps will the Welsh Government take to better support those living with long-term conditions given that the Cystic Fibrosis Trust's The Cost of Cystic Fibrosis report highlights tha...

How is the Welsh Government helping people with the rising cost of living?

What support is the Welsh Government providing or planning for renewable energy production from natural resources on farms in Wales, including wind, water, solar and organic waste?

Mark’s interests outside politics are his family and home. He is also a lapsed sailor and dog walker.

Mark has been a community councillor for Treuddyn, a former school governor (and chair) of Ysgol Parc y Llan, and former voluntary board member of Venture Housing Association.

Mark lives in Flintshire with his wife. They have six children and a grandchild. A politics graduate of Newcastle University, Mark qualified as an Associate of the Chartered Institute of Bankers. He was previously employed as a building society area manager in north Wales.

Mark was first elected to the National Assembly for Wales in 2003, before being re-elected in 2007, 2011 and 2016. In the Second and Third Assemblies he was the Welsh Conservative Shadow Minister in a range of areas, including Finance, Education, Social Justice, Equality and Housing, as well as being the member of a number of Assembly committees and chairing the Assembly’s Legislation Committee No. 5. He also chaired Cross-Party Groups on Fuel Poverty, Neurosciences, and Funerals and Bereavement. In the Fourth Assembly he was the Welsh Conservative Shadow Minister for Communities, Housing, Policing and North Wales, as well as sitting on the Assembly’s Communities, Equality and Local Government Committee and the Assembly’s Standards Committee. He has also chaired Cross-Party Groups on Autism, Neurological Conditions, Fuel Poverty, Hospices and Palliative Care, and Funerals and Bereavement, and Co-chaired the Cross-Party Group on Disability.