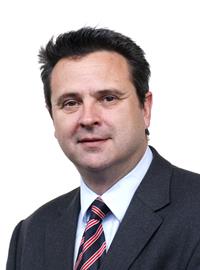 Huw Lewis was a Member of the National Assembly for Wales between May 1999 and April 2016. This was his biography at the time he left.

Huw is married to Lynne Neagle (Labour & Co-operative Assembly Member for Torfaen) and they have two sons; James and Sam.

He was Assistant General Secretary of the Welsh Labour Party prior to his election to the National Assembly in May 1999. Born in Merthyr Tydfil in 1964, he was educated at Edinburgh University and taught chemistry at his former secondary school, Afon Taf High School, Merthyr Tydfil.

In June 2013, the First Minister appointed Huw as Minister for Education & Skills.

Politically, Huw is a member of the Co-operative Party, the Fabian Society and Unite the Union.