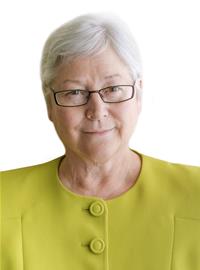 Sandy Mewies was a Member of the National Assembly for Wales between May 2003 and April 2016. This was her biography at the time she left.

Sandy Mewies lives near Holywell with her family. Her interests outside politics include cooking and reading and she is a regular user of Flintshire library service. She is a graduate of the Open University.

Before entering politics, Sandy’s main career was in journalism, but she also worked in the voluntary sector and as a lay schools inspector. She was a County Borough councillor in Wrexham for 16 years, serving as deputy leader and chair of Social Services. In 2001 she was Mayor of Wrexham. She was a member of the Wales European Centre and the North Wales Probation Board.

Sandy was first elected to the Assembly in May 2003 and was re-elected in 2007 and 2011. She has chaired the Assembly’s European and External Affairs Committee and the Communities and Culture Committee. She has also served on the Social Justice and Regeneration Committee, the Environment, Planning and Countryside Committee and North Wales Regional Committees.

She is an Honorary Fellow of Glyndwr University and a member of Unite.