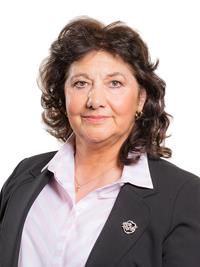 What action is the Welsh Government taking to respond to the mental health needs of young people?

What steps is the Welsh Government taking to monitor new variants of the SARS-CoV-2 virus?

What action is the Welsh Government taking to combat the rise in dog thefts in Wales?

Delete all after point 2 and replace with: Regrets the fact that more than 23,000 UK-domiciled applicants failed to gain nurse training places last year and that, since 2010, more than 5...

What plans does the Welsh Government have to improve cancer diagnostics in light of the coronavirus pandemic?

Caroline Jones was a Member of the National Assembly for Wales between May 2016 and April 2021. This was her biography at the time she left.

Caroline suffered from breast cancer in 2007 and has become a ‘buddy’ for cancer sufferers. She continues to fund raise and undertake voluntary work for cancer charities and actively supports a number of animal welfare charities.

Caroline was born in south Wales, the daughter of a former Serviceman and granddaughter of a miner. She was educated locally, attending college and university in the region.

Caroline stood for UKIP in the European Election in 2014 and the General Election in 2015 before becoming the lead candidate for the party in the South Wales West Assembly region.