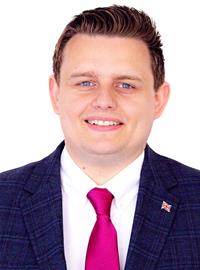 Diolch, Dirprwy Lywydd. It's a real pleasure for me as a former teaching assistant to respond to this debate today. I think it's been a really interesting debate, with a lot of different...

I have only got one question. Obviously, we all know that sport has quite a lot of soft power when it comes to international relations. So, I'm wondering what and how you think sport shou...

Can I move the conversation on to sport and international relations, and just ask how you think sport is and should be used to promote Wales to the world, and whether you think the Welsh...

Yes. As we're talking about these organisations, a lot of them, I imagine, have members of staff that would have been on furlough for large periods over the last year. You mentioned, I th...

Tom has a keen interest and background in education, having worked as a Learning Support Assistant in a Welsh Language primary school. He also chaired the Bridgend County Borough Council Education Scrutiny Committee, overseeing and scrutinising the council's multi-million pound education budget. Tom also has a keen interest in the structures and development of local government as he has been a Council Group Leader in Bridgend for 4 years.

Tom grew up both in Penllergaer, Swansea and Ammanford, Carmarthenshire as his parents were separated. Graduating from Swansea University with a BA in History and Politics in 2013, Tom then continued to live in Swansea for a number of years before moving to Bridgend in 2016, where he lives there with his fiancé, Sadie.

Tom, who is a second language Welsh speaker, has held various roles during his professional life, firstly becoming a Learning Support Assistant in a Welsh Language primary school. He then went on to complete his studies at Swansea University. Upon his graduation, he then went on to work as a Community Liaision Officer within his region of South Wales West before organising campaigns and working with volunteers in both Swansea and Bridgend. Prior to his election as a Member of the Senedd for South Wales West, Tom held the position of Office Manager for the Bridgend Member of Parliament.

Before his election to the Senedd in 2021, Tom was elected to the Brackla ward as a Bridgend County Borough Councillor in 2017, where he leads the Conservative Group on the Council.