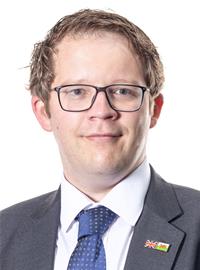 Well, I'm not necessarily concerned with the past—I'm more concerned about the present and the future. Measuring productivity is a very complicated subject and there is no linear correla...

Thank you, Dirprwy Lywydd. I've got to admit, I have considerable sympathy for the Deputy Minister; not only do you debate matters that are within your remit, but it now seems that you ha...

Thank you—Janet, I suppose. I believe that if any Government is to enforce a policy of decarbonisation of buildings, they should lead by example, and as you mentioned about the road map,...

3. What proposals does the Senedd Commission have to make the Senedd estate carbon neutral? OQ56847

In the diversity and inclusion strategy for public appointments in Wales, it outlines that the Welsh Government will develop guidance for undertaking pre-appointment hearings. The rationa...

Joel’s interests include: culture, history and heritage; planning and local government; strengthening the Union; and campaigning for people and communities that are often forgotten and left behind.

Joel was born at East Glamorgan Hospital in Church Village and attended Bryn Celynnog Comprehensive School in Beddau. He studied History at the University of Bristol, and holds a Master’s degree in Welsh History from Cardiff University.

Prior to his election, Joel worked as the Librarian for Cardiff Sixth Form College, one of the highest rated schools in the United Kingdom, and oversaw the development of their lectures programme. He is a member of the Charted Institute of Library and Information Professionals, and Llafur: The Welsh People’s History Society.

In 2008, Joel became the first Conservative councillor ever elected Rhondda Cynon Taf County Borough Council, representing his home ward of Llantwit Fardre. He has contested the Pontypridd Assembly/Senedd constituencies at the 2011, 2016 and 2021 Welsh Government elections, and serves as a community councillor on Llantwit Fardre Community Council. He has been involved in a myriad of political campaigns, and is extremely proud with his involvement in fighting against residential developments on floodplains; fighting for and securing fair freehold agreements for homeowners; and achieving large-scale levels of highway investment.