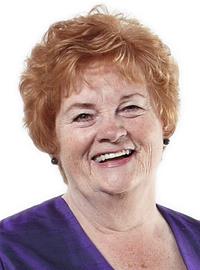 Dame Rosemary Butler was a Member of the National Assembly for Wales between May 1999 and April 2016. This was her biography at the time she left.

Dame Rosemary Butler has lived in Caerleon, part of the Newport West Constituency, for many years, and attended St Julian's High School. Her interests range from museums, art galleries, concerts and opera, to foreign travel and family history.

Rosemary joined the Labour party in 1971 and two years later she was elected Labour councillor for Caerleon on Newport Borough Council, a position she held until 1999. While on the council, she chaired the Leisure Services Committee for 12 years, and served as Deputy Leader and Mayor of Newport (1989/1990).

She was elected as Newport West’s first Assembly Member in May 1999 and has been re-elected in each subsequent Assembly election.

Rosemary was appointed to the first National Assembly cabinet as Minister for pre-16 Education and Children, and chaired the Culture, Welsh Language and Sport Committee and was the Assembly’s representative on the European Union’s Committee of the Regions. She has also been Deputy Presiding Officer, Chair of the Assembly’s Legislation (1) Committee (which scrutinised all backbench proposals to introduce Measures) and served on the British Council Cross-Party group.

In May 2011, Rosemary was elected to the position of Presiding Officer of the National Assembly by a unanimous vote of Assembly Members. In addition, she represents the Assembly on the British Irish Parliamentary Association and CALRE (Speakers of Legislative Bodies in the European Union).