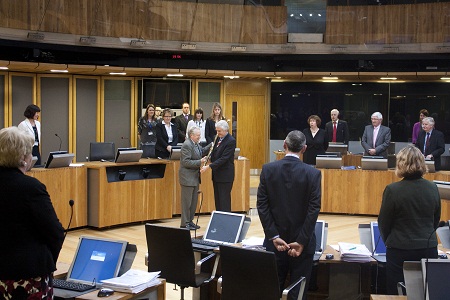 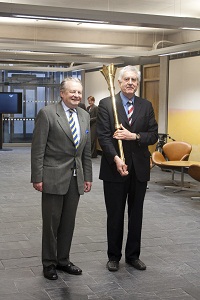 The business of the current session of the National Assembly for Wales was drawn to a close today (30 March) with the ceremonial removal of the Mace.

Presiding Officer Lord Dafydd Elis-Thomas AM handed over the Mace to former First Minster Rhodri Morgan AM, who is standing down as an Assembly Member, to carry it out of the Chamber.

It brings to an end the business for the Third National Assembly, in which 22 new Welsh laws, known as Assembly Measures, were passed.

This mirrors the tradition of the Royal Opening, when the Mace is brought back into the Siambr at the start of the new Assembly.

The Assembly will be officially dissolved at Midnight on March 31.

“As Presiding Officer, I would like to express my gratitude to the Chief Executive and, through her, to all members of staff for their enthusiasm and thorough professionalism in promoting Welsh democracy.

“All of you can be proud of the fact that your commendable work contributed towards the vote of confidence we received from the people of Wales in the recent referendum.

“Please accept our gratitude as Members of the Third Assembly.”

The National Assembly will not sit again until after the Assembly election on 5 May.

The Mace is hand crafted from gold, silver and brass and it was designed and made by the Melbourne goldsmith Fortunato Rocca. It took 300 hours to make.

The Mace is inscribed with the emblems of the NSW Parliament and the Assembly.

The lettered inscription reads, “presented to the National Assembly for Wales 1 March 2006”.