Although some progress has been made in tackling violence and aggression against health service staff, there has been a general lack of urgency given to combating the problem.

That’s the view of the National Assembly for Wales’ Audit Committee which has completed an inquiry into the problem that affects nurses, doctors and support staff in hospitals and surgeries throughout Wales.

Committee members, who will launch the report at the University Hospital of Wales, in Cardiff, today (July 1) now want urgent action taken in a bid to overturn the "lack of progress” made since the committee last looked at the issue in 2006.

"It’s just over three years since the committee reported first on the need to protect NHS staff from violence and aggression,” said committee chair, Jonathan Morgan AM.

"But there is still a long way to go and in three years only limited progress has been made.

"Alongside this, it seems that there has been a general lack of urgency given to this important issue and it was disappointing that the main response from health management seemed to be that this would all be fine in October, following NHS reorganisation.”

In particular, the committee raised concerns about the low rate of prosecutions compared to the number of incidents and called on the health minister to investigate, in conjunction with unions, whether there’s a need to lobby Westsmintser to introduce new legislation.

Members also raised concerns that many security staff were temporary and privately contracted which meant in many cases they lacked the skills and training to cope with the specific issues of hospital or health care setting.

They also found that the general approach to training of staff to deal with incidents of violence was still too casual.

The committee therefore recommend that: 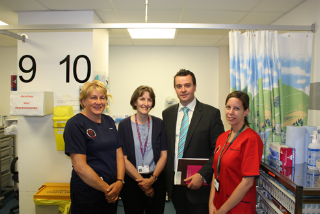