“We see a lot of arguments and negativity in politics on the news but the Citizens’ Assembly was completely different.” 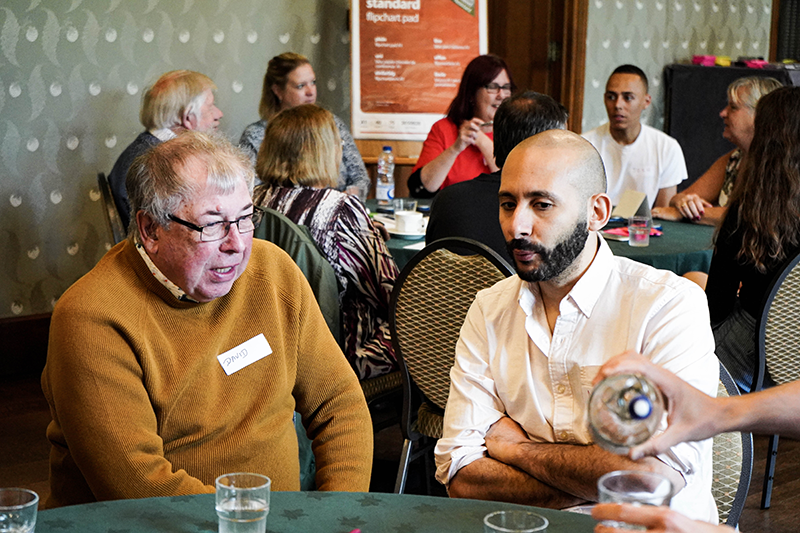 “When a letter came through the door inviting me to participate in the Citizens’ Assembly I was intrigued and didn’t know what to expect – but after going through the process I came away buzzing, and feeling very positive. Often you can feel very detached from the political process – but it was nice to be included and listened to. The idea of taking ideas to a cross section of the population for discussion really appealed to me - it made me feel that the system is interested in its citizens” - Mark Curry, Citizens’ Assembly Member.

At an event at the Senedd marking the 20th anniversary of devolution, the voice of Wales’ first Citizens’ Assembly is being heard. On Sunday 29 September, as part of the GWLAD festival, the report findings are being presented to the National Assembly for Wales for consideration and action.

About the Citizens’ Assembly

In July this year 60 people from across the country representative of the Welsh population, gathered at Gregynog Hall in Newtown to form a Citizens’ Assembly – a first for Wales. They tackled the issue of how people in Wales can shape their future through the work of the National Assembly for Wales.

To ensure the people of Wales were best represented at the Citizens’ Assembly, organisers went to great lengths to select people who accurately reflected the makeup of the Welsh public. This included age; educational level; ethnicity, gender, geographical spread, Welsh language skills and voters and non-voters in the 2016 National Assembly for Wales election.

The Citizens’ Assembly met on the weekend of 19-21 July and, following two days of deliberation and discussion, a detailed report was compiled to show their findings and present their recommendations.

The Citizens’ Assembly debated, then voted on what they believed to be the key challenges facing Wales – these included health services, mental health services and education. They also voted on areas they felt are working well in Wales including maintenance and access to historic buildings; high quality local produce and food; and environmental protection with good progress on recycling.

A key part of the Citizens’ Assembly’s work was to look at how people engage with decision-makers at the National Assembly. Over the weekend participants were informed on ways in which people can currently influence the work of the National Assembly and then discussed new ways that people could participate in Assembly committee inquiries and consultations; ways members of the public can be involved in questioning government; how people can have a say in how the budget in Wales is approved and setting the wider political agenda. The members explored ideas on new ways in which the National Assembly could involve citizens.

An overwhelming majority of participants agreed that the use of citizens’ assemblies to tackle issues in the future was a good idea and should be developed further. However social media was not considered to be an answer to public involvement with the majority of participants not supporting its use to question government, asserting that it could not be a representative sample of people so could be biased.

Citizens’ Assembly members were clear that the National Assembly for Wales should do more to engage people across the country and the use of innovative ways like citizens’ assemblies and online platforms was welcomed.

The Citizen’s Assembly’s report is a key part of the National Assembly’s 20 years of devolution programme which looks at the future direction of democracy in Wales.

Elin Jones AM, Llywydd of the National Assembly for Wales, who is opening the Citizens’ Assembly report launch event said:

“I am proud of the work of our first Citizens’ Assembly - this was a landmark event and an important step on our devolution journey."

“Public engagement is at the heart of the National Assembly’s work. We want people in all parts of Wales to get involved with the democratic process by sharing their views and ideas with us."

“For a democracy to thrive and improve, everyone must be involved. The Citizens’ Assembly is a pioneering way in which we can make sure our work is in line with the priorities of people across the country."

“The feedback we’ve had from the participants has been overwhelmingly positive and better than we could ever have wished for. I would like to thank all of those who took part for their time and efforts and for showing us that this a valuable and effective way to engage with the people we represent.”

Mark Curry, Citizens’ Assembly Member, who is retired and lives in Edern on the Llŷn Peninsula, said:

“What really struck me was the quality of debate and the opinions expressed by people from all backgrounds. Sometimes we see a lot of arguments and negativity in politics on the news but the Citizens’ Assembly was completely different. People were courteous and really listened to each other, it was great to have an informed discussion and hear the views of others and have the opportunity to contribute mine."

“Many different topics were raised over the Citizens’ Assembly weekend, I raised the issue of transport infrastructure in Wales and the provision of railway services for rural communities like mine. I think this process would be a very helpful way of tackling some of the issues we face in future.”

“The Citizens’ Assembly was a great idea. Some people only ever engage with the process when they go to vote but this an effective way to reach people who wouldn’t normally be involved in the political process. It is a great way to bridge the gap between people and politics."

“I learned a lot about the way the Welsh Assembly works which helped us make informed decisions."

“There is an unfortunate lack of accountability on social media platforms, which leaves them open to potential abuse. If we do use online platforms or forums to engage the public with the National Assembly, we must also be very careful not to exclude those without access to the internet, or those unable to use technology. I feel that any online forum must be subject to moderation - which also brings up the issue of censorship."

“It was a great experience and I hope everyone will have more of a say in future.”