A Day in the Senedd with Urdd competition winner Lora Lewis

Lora Lewis joined the Assembly’s Translation and Reporting Service for a day after winning the Urdd translation competition. Here she talks about her experience behind the scenes...

As someone who has considered a career in the translation industry, competing in the Urdd competition was a natural step once I discovered that the prize was a day at the Assembly. This certainly appealed to me straight away and I set about translating the competition piece. Luckily, I got the news that I had won, and Aoife, a member of staff in the translation and reporting service at the Assembly, got in touch with me shortly afterwards and the preparations began. In no time at all, I was handing over all my possessions to go through the cameras as if I was in an airport before entering the building. To start with, I met the Presiding Officer, Elin Jones, and had an opportunity to chat to her about the work that goes on in the Senedd, as well as introducing myself to her. The Presiding Officer was very welcoming and we even had time to take a quick photograph. After that, it was time to start the work experience for real. I met Rhiannon and she gave me a detailed presentation of the work on the Record of Proceedings and the way they use appropriate software when transcribing and editing the official Record. I had an opportunity to do this myself using voice recognition software that could record what I said through a microphone. Without a doubt, this was great and showed me how important technology is in the workplace to facilitate these kinds of tasks. 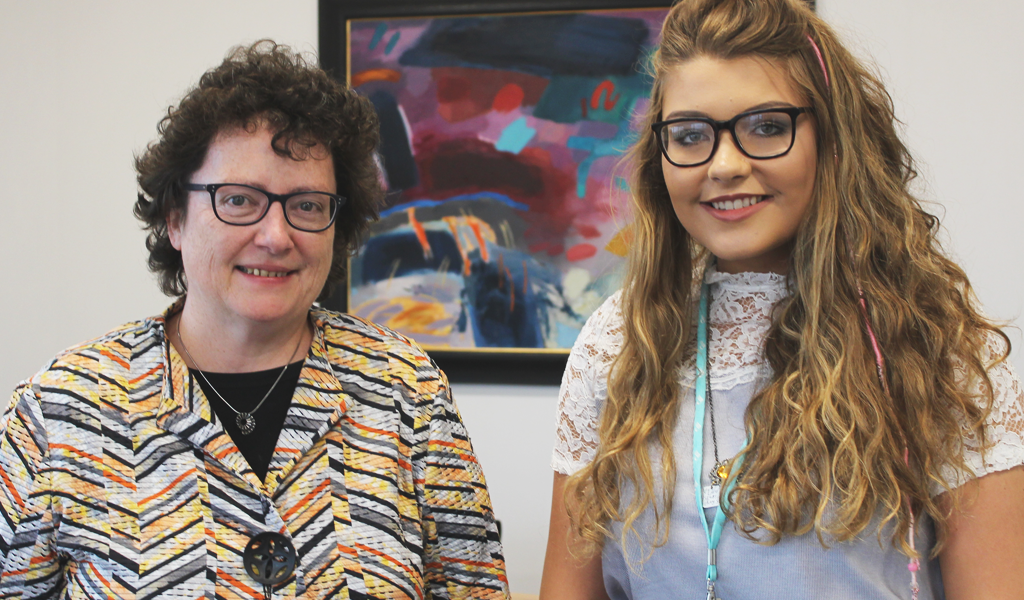 I was most interested in simultaneous translation, and I was very lucky to get an introduction to this aspect in particular from Cai, a translator in the department. This aspect is definitely one that frightens many translators, and it’s an element of the work that certainly worried me – but Cai was ready to reassure me by offering lots of useful tips. I was introduced to simultaneous translation through a visit to the interpreting booths in the committee rooms and the Chamber. I also got to watch Plenary when the First Minister was speaking. The simultaneous translation there was very exciting and gave me an insight into how difficult this aspect of the work is, as well as what an incredible skill it is to develop. I was also happy to see that Welsh lessons are available for members of staff from all services, and I had the opportunity to join a group for a while. The lessons were fun and everyone showed great effort and enthusiasm in learning the language. In my opinion, this was a very positive aspect of my experience in the Assembly. Despite being most eager to learn about simultaneous translation, I also had a thorough introduction to machine translation from Gruff. He showed me how simple it is to translate using the appropriate programmes and explained how, by now, most of the work is saved in the translation memory, facilitating the work of the translators and saving a lot of time. Using this software means it’s possible to translate more in less time – without a doubt, this is a very positive development! In addition, he gave me several tips on editing and using Welsh on the computer every day, with websites like Byd Term Cymru that have all the terminology you need when working through the medium of Welsh. I liked the editing element that is evident in every aspect of the work and getting a taste of doing that was a very useful experience. It was nice to hear, as well, that a company as large and successful as Microsoft is investing time and money into machine translation and working together with the Assembly to develop translation software. I certainly got a taste of translating as well as experiencing what it’s like to translate in the Assembly. I was not disappointed in the slightest. Thanks to all the staff who were so welcoming from the outset, and thanks to Aoife in particular for being responsible for me and for arranging my timetable for the day. On a lighter note, I would like to thank Cai directly – I never would have thought that ‘scallop fishing’ translated into ‘pysgota cregyn bylchog’ in Welsh! Thanks to the Urdd alongside Cymdeithas Cyfieithwyr Cymru for giving me this special opportunity – if you’re reading this, under 25 years of age and enjoy translating, go ahead and compete next year! I certainly hope that I will return to the service one day – whether on work experience or even fortunate enough to work there as a translator.
#CardiffBay #Senedd #Urdd #WelshLanguage