#AskLlywydd – The Presiding Officer, Elin Jones AM, answers your questions

The Presiding Officer, Elin Jones AM, will be at the National Eisteddfod on 2 August in conversation with ITV Wales journalist Catrin Hâf Jones, talking about the unique challenges and opportunities she faces in the Fifth Assembly. The Presiding Officer will also answer questions from the audience and submitted through social media. 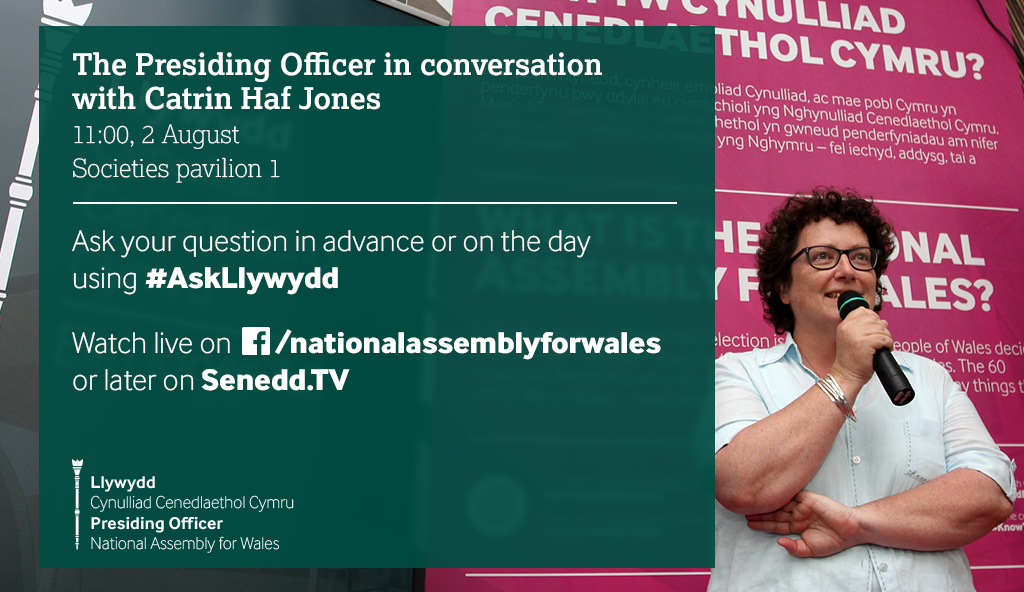 Questions can be sent in advance or on the day, either by using #AskLlywydd  / #HoliLlywydd on Twitter, or by posting on the Assembly’s Facebook pages, where the session will be streamed live from 11:00am.

How do I watch?

How do I submit a question?

You can submit your questions for the Presiding Officer in a number of ways:

The Assembly for Wales can make laws in 21 devolved areas: Here are some further links that you may also find helpful: Key Issues for the Fifth Assembly – This publication sets out a selection of issues likely to matter in the Fifth Assembly, from the steel industry to the future of Welsh law-making. Wales and the EU: What does the vote to leave the EU mean for Wales? – Our Research Service explains what could happen after the Leave vote in Wales. New Assembly Commission launches strategy for Fifth Assembly – News article about the new strategy for the fifth Assembly. The Role of the Presiding Officer – Information about the role of the Presiding officer.

Once all your questions have been collected, a few will be selected and answered on the day by the Presiding Officer. We will collate your questions and pass them to Catrin Hâf Jones before the interview. She will then incorporate them into her conversation with Elin Jones AM, Presiding Officer. If you’re at the Eisteddfod you can come and watch the interview in person, or watch live via our Facebook pages. Afterwards, the conversation will be available online on Senedd.TV. We’ll let you know if your question was answered. The Presiding Officer in conversation with Catrin Hâf Jones will take place on 2 August at 11:00am at the National Eisteddfod in Abergavenny. We look forward to hearing your views! If you are at the Eisteddfod you will be able to watch the interview live from 11:00am in the Societies 1 pavilion. If you are not able to attend we will be streaming the interview live in both English and Welsh to our Facebook accounts: Assembly Wales Facebook Cynylliad Cymru Facebook You will also be able to watch the full interview on Senedd.tv after the event, along with transcripts. View this post in Welsh
#Abergavenny #Culture #Eisteddfod #Events #Monmouthshire #PresidingOfficer #SouthWales