Concerned about the future of the BBC in Wales? Put your question to Tony Hall, the Director General of the BBC

The Culture, Welsh Language and Communications Committee wants to hear from you before their meeting with Tony Hall, the Director General of the BBC.  The meeting takes place on 2 November and will be streamed live on Senedd.TV. The deadline for questions is 21 October. On Twitter you can use #AskBBC or tweet the committee @SeneddCWLC. You can also leave a comment on the Assembly’s Facebook Page or e-mail your question to SeneddCWLC@assembly.wales. 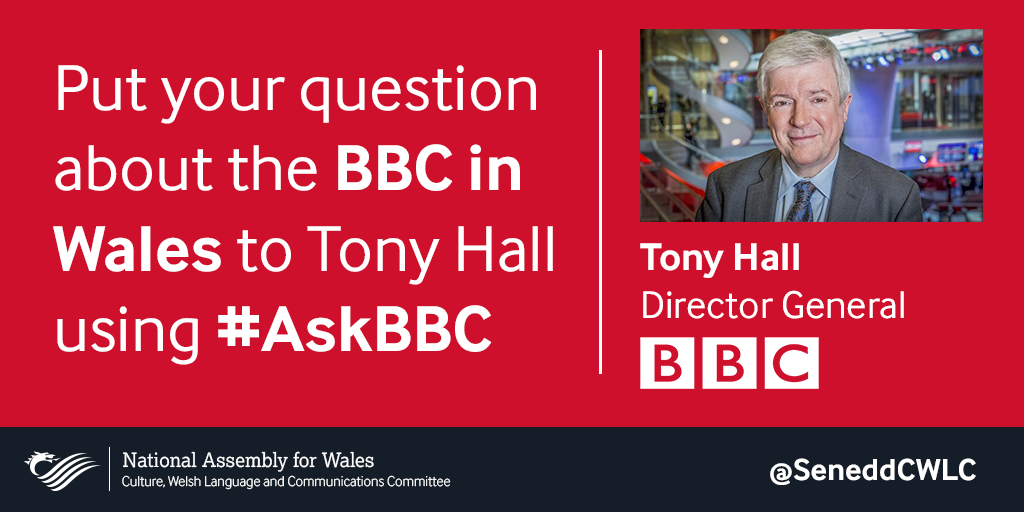 Who is Tony Hall and what does he do?  Tony Hall – the Lord Hall of Birkenhead – is the 16th Director General of the BBC. The Director General is the Chief Executive Officer of the BBC, its Editor-in-Chief. To find out more about Tony Hall and the role of the Director General you can visit the BBC’s website. Why is he coming to the Assembly? The Assembly’s new Culture, Welsh Language and Communications Committee is currently looking at the impact of the BBC Charter and what the future of BBC programming in Wales will look like. The Committee will be covering areas including the BBC Charter Review and the recently appointed role of ‘Director of Regions and Nations’. BBC Wales’s annual budget is in excess of £150 million and produces programming for Radio Wales, Radio Cymru, television and online services. BBC Wales also makes 10 hours a week of TV for S4C. In recent years the amount of English language content produced specifically for Wales has declined. A message from Bethan Jenkins AM, Chair of the Culture, Welsh Language and Communications Committee: The BBC is a cornerstone of many people’s media consumption and could be about to undergo a number of significant changes under the Charter Review.  In some ways Wales benefits greatly from the BBC through its drama village in Roath Lock where Sherlock, Doctor Who and Casualty are filmed. All world-class productions which put us firmly on the map.  But there is a lack of programming and content specific to Wales and recent budget cuts are deeply concerning  So we will be asking the Director General what he thinks the BBC in Wales will look like in the future. What is a committee?  A committee is made up of a small group of Assembly Members from different parties who look at particular issues in more detail. They often seek input from external expert advisors and members of the community before making decisions. Committees recommend ways in which (for example) government policies could be more robust and its expenditure more effective, efficient and economical. Committees engage proactively and innovatively with individuals and organisations which can articulate the voice and experience of the people of Wales. Full list of National Assembly for Wales committees