How well is the Welsh Government doing its job?

This is a question Assembly Members at the National Assembly ask every day, in committee meetings, or in Plenary meetings, in the main debating chamber of the Senedd, in Cardiff Bay. If the Welsh Government’s job is to “help improve the lives of people in Wales and make our nation a better place in which to live and work”, then it’s important that the Assembly hears from the wide range of people affected by the decisions that the Welsh Government makes. The National Assembly for Wales is the body tasked with analysing how well the Welsh Government is doing so, after all. How the Assembly does this has changed significantly over the last few years, particularly when it comes to the work of Assembly committees. People still reply to invitations to write to the Assembly to give evidence. Individuals, organisations and charities still visit the Senedd to be quizzed by AMs in formal meetings, though different approaches are needed to hear from different audiences. These are pictures of Julie Morgan AM and Jocelyn Davies AM taking part in a web-chat with students on Google Hangouts for the Finance Committee’s inquiry into Higher Education Funding: 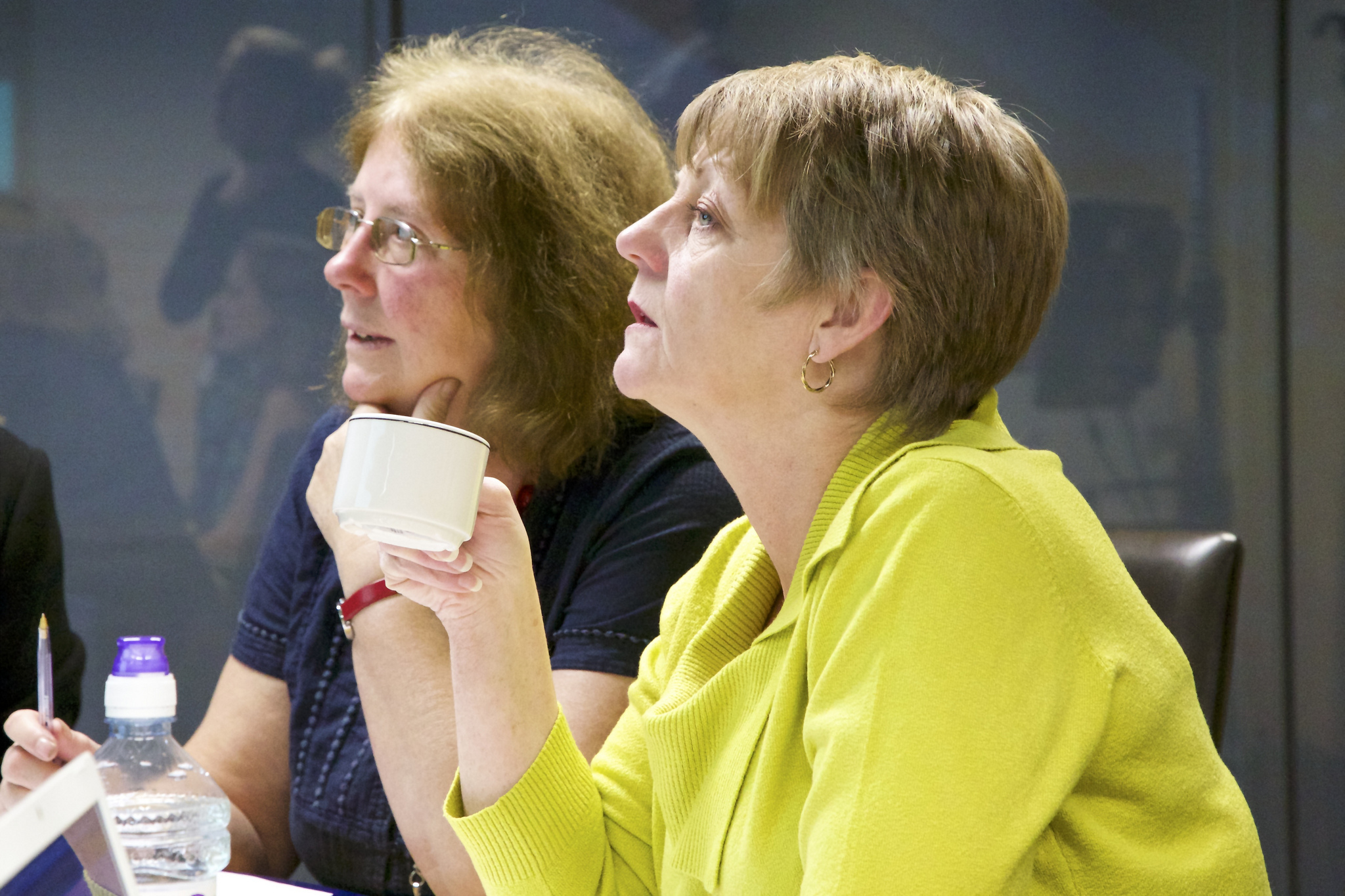 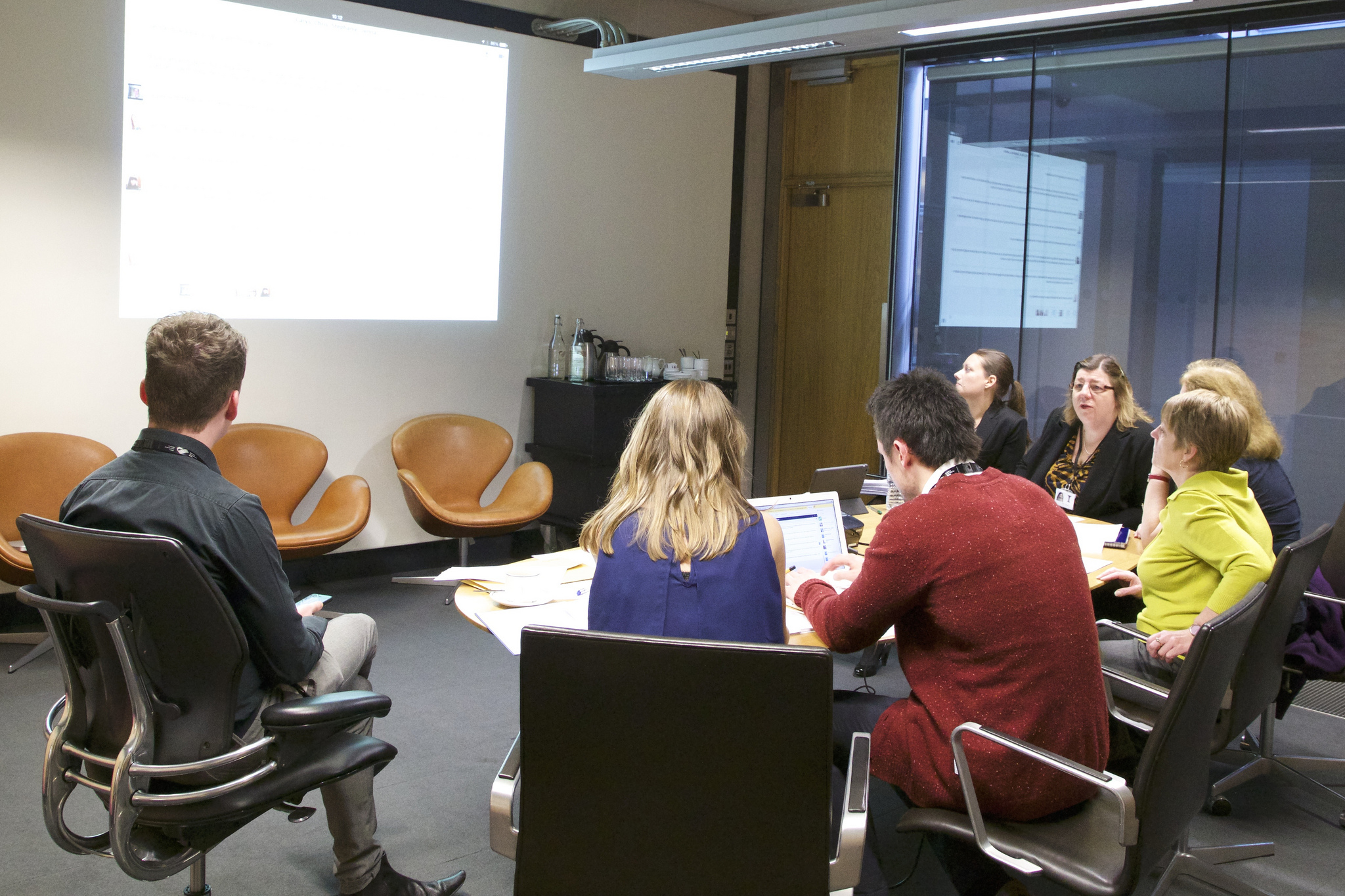 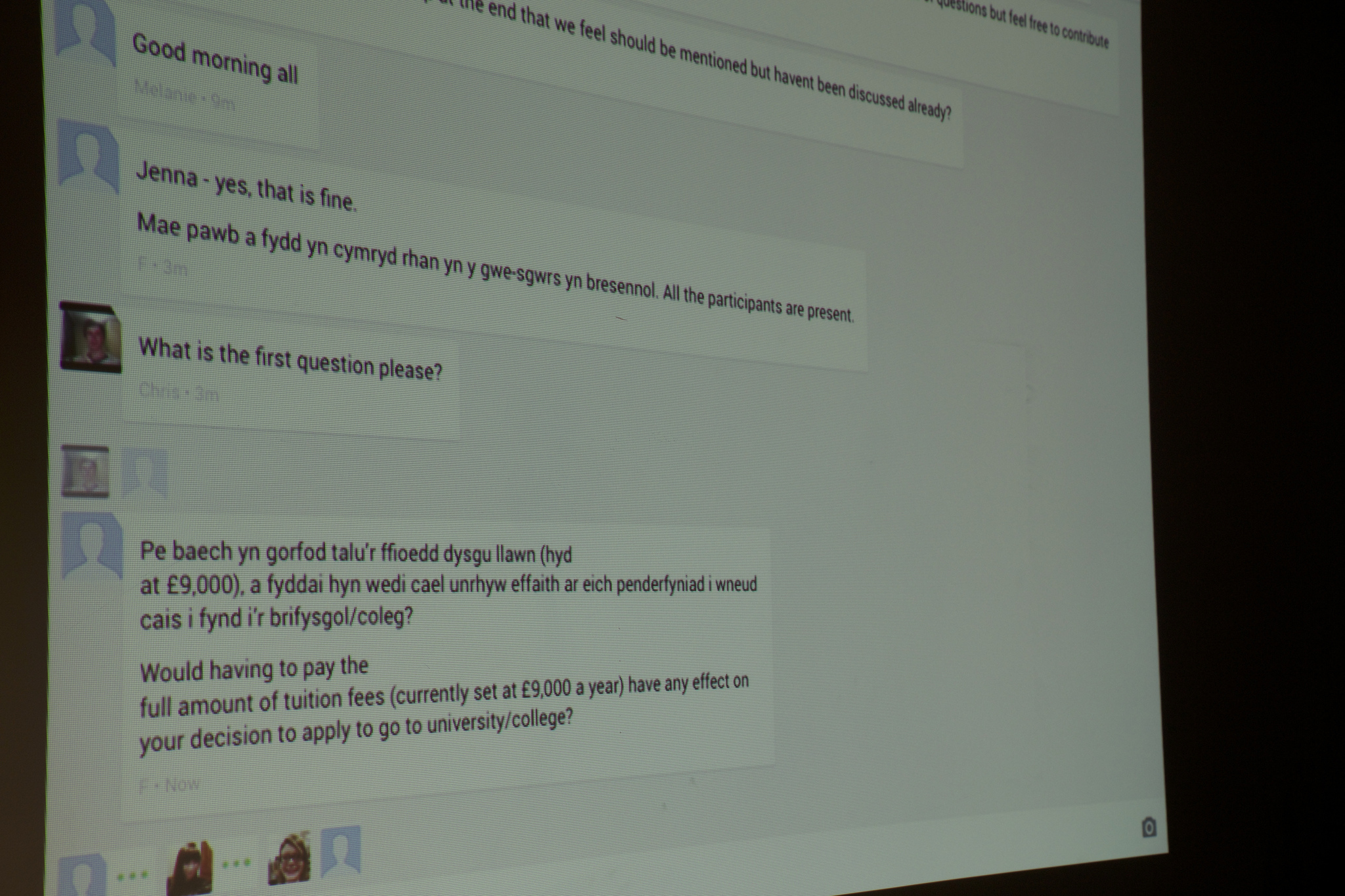 People everywhere lead increasingly busy lives, so making participation in the Assembly’s work as easy and accessible as possible is vital for engaging with the wide variety of people that make up the population of Wales. Increasingly at the Assembly, committees have been using digital channels to encourage people to share their views with us. We’ve used Google Hangouts to speak with students about STEM (science, technology, engineering and mathematics) Skills and Higher Education Funding, filmed members of the public on an iPad and shown it as evidence at formal committee meetings, and used Twitter to source questions to ask the leader of the Welsh Government, First Minister Carwyn Jones AM. The following video is a video of Rhun ap Iorwerth AM and Julie James AM being interviewed after taking part in their first web-chat on Google Hangout for the STEM Skills inquiry: [youtube https://www.youtube.com/watch?v=fomBO9zuluU&w=560&h=315] In the last few months we used Loomio for the first time, as part of the Health and Social Care Committee’s inquiry looking into alcohol and substance misuse in Wales. Loomio is a web-application to assist groups with collaborative decision-making processes. A key part of the inquiry was talking directly with the people affected by these issues, but some people find attending official committee meetings intimidating. Also not all those affected have the capacity to put their thoughts and feelings to the Committee in writing. Loomio allowed the Committee to talk to people, without everyone needing to be in the same room. Service providers and clients used the online forum to tell us what issues they had experienced, and what they wanted the Welsh Government to should do about it. This is a screenshot showing some of the contributions we had to the discussion: 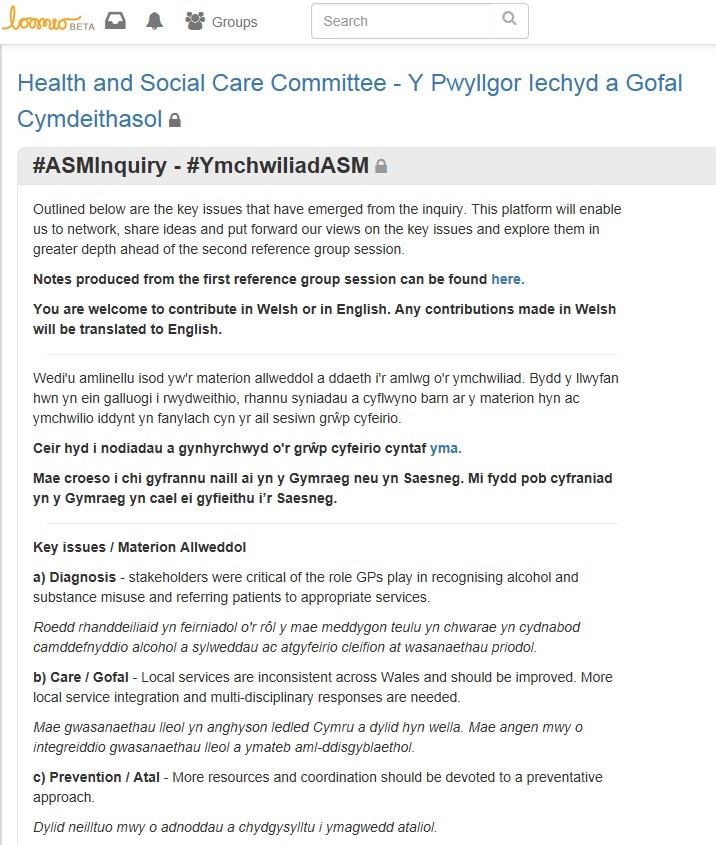 At the end of the evidence-gathering process, once a Committee has considered everything that people have told them, they will usually write to the Welsh Government. This is to explain what steps the Committee would like to see the Welsh Government take to improve people’s lives in Wales, based on the evidence the Committee have heard. This tends to be in official reports, which can be quite lengthy, but we are looking at different ways of presenting committee reports to make them shorter and easier to understand, at-a-glance. One of the summary versions is this video, made for people who were filmed for an inquiry looking at youth entrepreneurship: [youtube https://www.youtube.com/watch?v=dl3pakdX6Y4&w=560&h=315] More recently we have used Adobe Slate to summarise a report on Poverty in Wales: https://slate.adobe.com/a/EN6np Using digital channels and platforms has allowed us to engage with people more effectively and easily than before. It’s also meant that more people can help the Assembly scrutinise the Welsh Government’s performance, so the Assembly’s recommendations to the Welsh Government are based on the issues people experience in their everyday lives.
#Alcohol #Drugs #HigherEducation #STEM #Video #WebChat #YoungPeople