Blog by co-chairs of OUT-NAW, the National Assembly for Wales’ LGBT workplace network. Wow, didn’t Wales put on an excellent display of LGBT diversity and inclusion for this year’s Pride Cymru weekend? With charity cycle rides, a rugby 7s tournament, venues hosting LGBT choirs, rainbow flags all over the city, a huge parade through Cardiff city centre and, once again, this was followed by the main event at Cooper’s Field.  Year on year, Pride Cymru gets bigger and better and we’re extremely proud to be part of the celebration which has clearly developed into one of Cardiff’s annual signature events. As most people in Wales would expect, the National Assembly played its part once again. In addition to taking our outreach bus to Cooper’s field and flying the rainbow flags across our estate, this year we were delighted to be able to illuminate the Senedd with rainbow colours throughout the weekend. We also took part in the parade for the first time. Joined by network members, Allies, role models, Management Board members, partners and family members, we couldn’t have expected more support. One of the first to volunteer was a huge advocate for equality and diversity, our Chief Executive, Claire Clancy.  We were all proud to stand shoulder to shoulder on the parade to show our commitment to the creation of a safe, fair and inclusive Wales. [caption id="attachment_2398" align="aligncenter" width="321"] 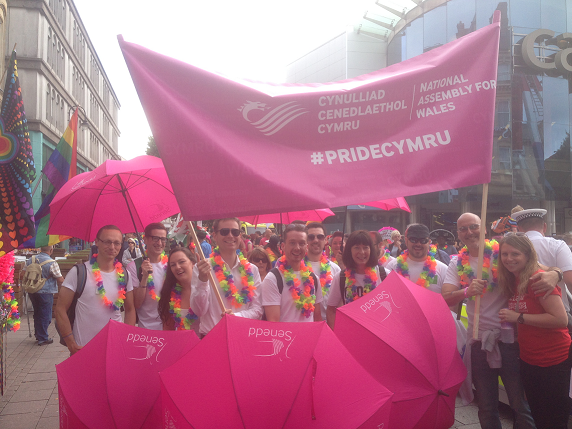 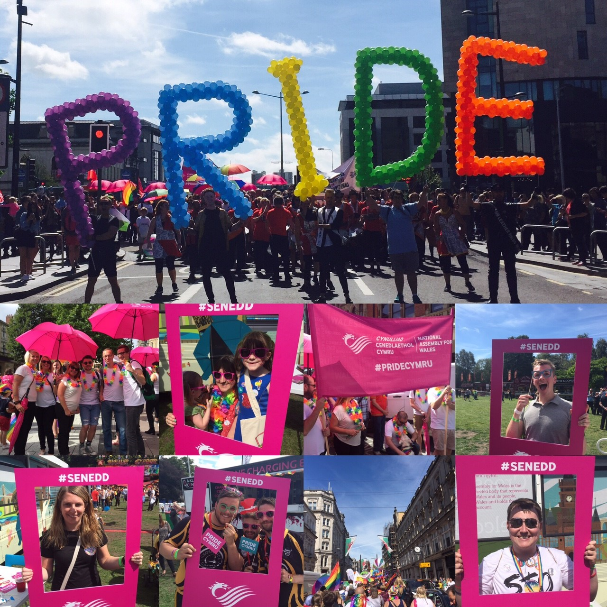 OUT-NAW members and the public enjoying the Pride Cymru march[/caption] Of course, our contribution on Cooper’s Field had to link back to democracy but this year we made it much more fun. Lots of people posed for photographs in our Senedd selfie frame which we tweeted throughout the day.  We were delighted to see new network member, Hannah Blythyn AM, before she spoke on the main stage.  In addition to our #KnowYourAM campaign and the consultation for our new diversity plan, many young people enthusiastically took part in the Children, Young People and Education Committee’s consultation on youth work.  Their views will feed into the Committee’s consideration and is exactly what our youth engagement strategy is designed to do – place young people’s views at the heart of the Assembly’s considerations. [caption id="attachment_2397" align="aligncenter" width="408"] 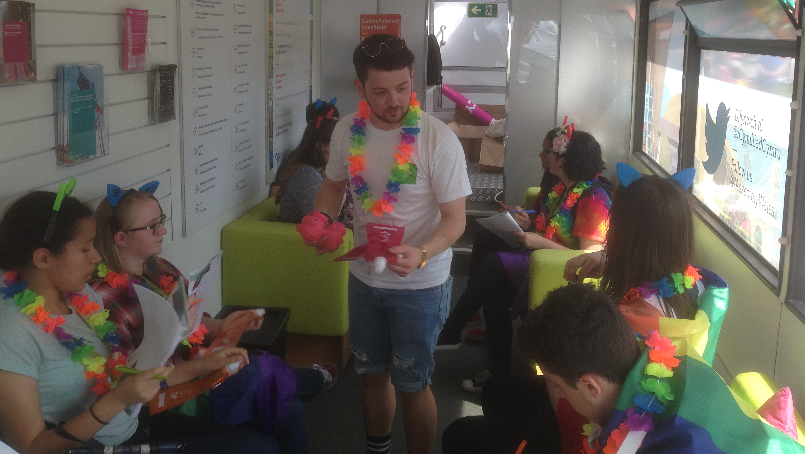 Young people taking part in the Youth Work inquiry[/caption] As Stonewall’s best public sector LGBT-inclusive workplace in Wales and third best organisation in the UK, we have assisted organisations in Wales and beyond with advice, resources, coaching and mentoring once again. That is what we should do to help create more and more inclusive workplaces where LGBT staff can be themselves and it’s important to us that we continue to do that. Of note this year is that a number of approaches have been made from beyond Wales’ border. We think it’s pretty exciting that others are taking notice of what Wales is doing and we’re always happy to help those who are trying to enter or improve their performance in Stonewall’s Workplace Equality Index. What has been different this year is the development of our networks beyond the expected. Members of OUT-NAW, our LGBT workplace network, are now using their skills and experience to help others. Whether that’s with the Scouts who now have a presence at Pride Cymru through the efforts of one of our network members, one of our Allies joining the board of trustees for Chwarae Teg, LGBT committees at the Law Society or national unions, through to making links to the South Wales Gay Men’s Chorus’ (SWGMC) charity work. Three members of OUT-NAW volunteer with Out and Proud, a project for LGBT+ young people in South Wales.  Hearing about the work of Out and Proud, realising that they operate on a shoe-string and couldn’t survive without willing volunteers, we decided to take action by using our own social connections and they are now the beneficiaries as the SWGMC’s nominated charity. Making that link between our various networks has seen a wider benefit to the LGBT community and that is something to be very proud of. The young people themselves feel they’re supported not only by our volunteers but by the wider LGBT community too.  It was wonderful and moving to see them empowered to speak about their gender and sexuality issues at a recent South Wales Gay Men’s Chorus concert where hundreds of pounds were raised.  Equally inspiring was seeing them at the Assembly’s outreach bus during Pride Cymru and taking part in democratic processes through our consultation on youth services.  We need young people to feed their views into the heart of Welsh democracy and doing so from a minority viewpoint is so important.  After all, the Assembly represents all the communities of Wales so a diversity of views helps create a full and rounded picture of the issues under consideration. So this brings us to the end of a busy year for OUT-NAW. While we are delighted to have introduced gender-neutral toilets for staff and visitors across our estate in Cardiff Bay this year, there is always more to do to help shape an inclusive democracy.  We take that responsibility seriously and we’re looking forward to the year ahead. For another fantastic year, we would like to take this opportunity to thank OUT-NAW members, our Allies, the Assembly’s political leadership, our Management Board and the Diversity and Inclusion team, particularly Ross Davies for his drive, determination, skills and experience of LGBT diversity. He is a constant source of advice and guidance, ensuring that we take the right steps towards a more inclusive workplace. Jayelle Robinson-Larkin and Craig Stephenson Cyd-Gadeiryddion / Co-Chairs [caption id="attachment_2118" align="aligncenter" width="392"]