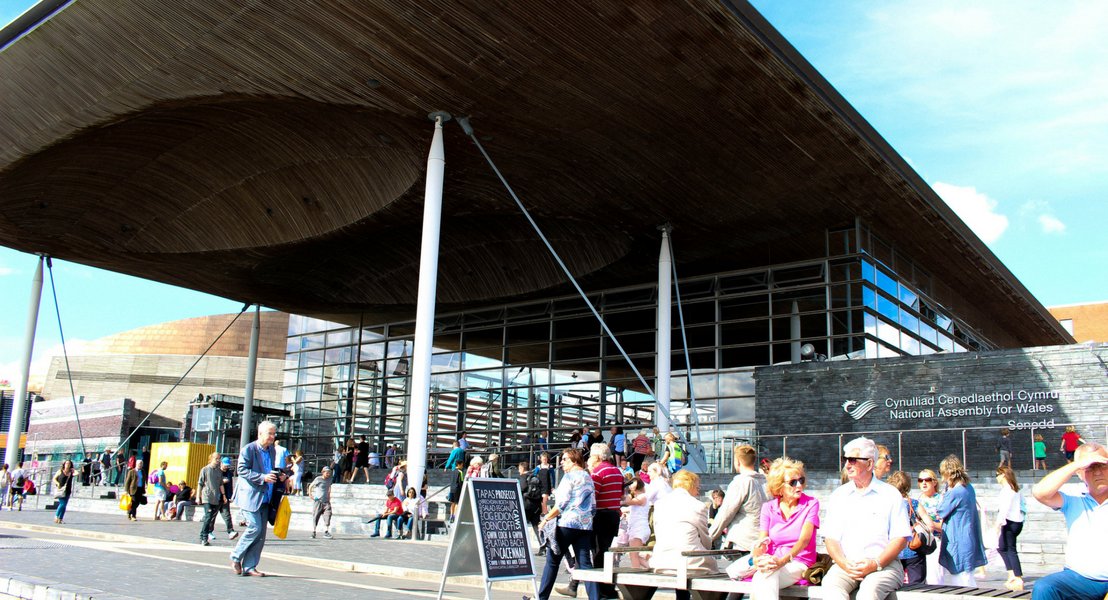 During August 2018 the National Assembly for Wales was proud to play an integral role in this year's National Eisteddfod by hosting a range of exhibitions, discussions and events exploring life in Wales. Dubbed the Eisteddfod with no fence, the Senedd became home to Y Lle Celf (the art exhibition) and the Societies Pavilion. The Eisteddfod has hosted an ‘Art and Crafts’ exhibition in some form since 1865. Nowadays Y Lle Celf comprises of a multi-media exhibition of contemporary fine and applied art, and a celebration of architecture in Wales. This year exhibits included Jin Eui Kim’s eye-catching ceramics, 2018 Tony Globe Award winner Philip Watkins’ paintings of Valleys life and 2018 Gold Medal and People’s Choice award winner Zoe Preece’s ceramic and wood pieces, alongside many other thought-provoking displays. Covering much of the Senedd’s floor, you can watch André Stitt’s huge installation take shape in this time-lapse video: [wpvideo EEmUbj5l] The Societies Pavilion saw the Assembly host discussions on issues including austerity, women’s role in politics, votes at 16, democracy and the arts, electoral reform and justice in Wales. If you missed them the first time you can view them again here: Democracy and the Arts: the effect of one on the other Democracy and the Arts play a central role in the lives of Welsh people – but how do they affect each other? Llywydd of the National Assembly, Elin Jones AM, chaired a discussion panel along with the Chair of the Assembly's Culture, Welsh Language and Communications Committee, Bethan Sayed AM, Artist Elin Meredydd and leading dance, performance artist and presenter Eddie Ladd. [caption id="attachment_4955" align="alignnone" width="1108"] 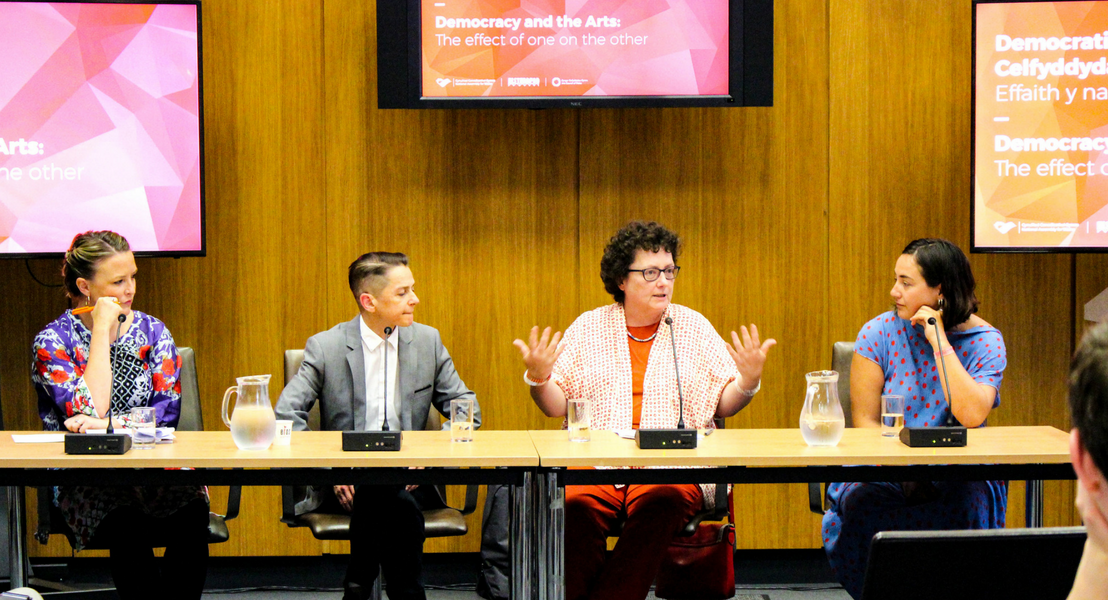 Democracy and the arts discussion panel[/caption] Ready for the vote? An event in partnership with the Electoral Commission to discuss reducing the voting age to 16 at elections in Wales. The discussion was chaired by Elan Closs Stephens, Electoral Commissioner for Wales with panellists Elin Jones AM, Llywydd, Sally Holland, Children's Commissioner for Wales and young people including Ethan Williams, Vice-President of Urdd Gobaith Cymru and Vice-Chair of the Syr IfanC Board, the Urdd's National Youth Forum. Women's Role in Politics Marking 100 years since the successful campaign to secure votes for women, Elin Jones AM, Llywydd, was joined by historian Dr Elin Jones to discuss the influence of women on politics in Wales, in the past and present. Journalist and TV presenter Bethan Rhys Roberts chaired. [caption id="attachment_4956" align="alignnone" width="1108"] 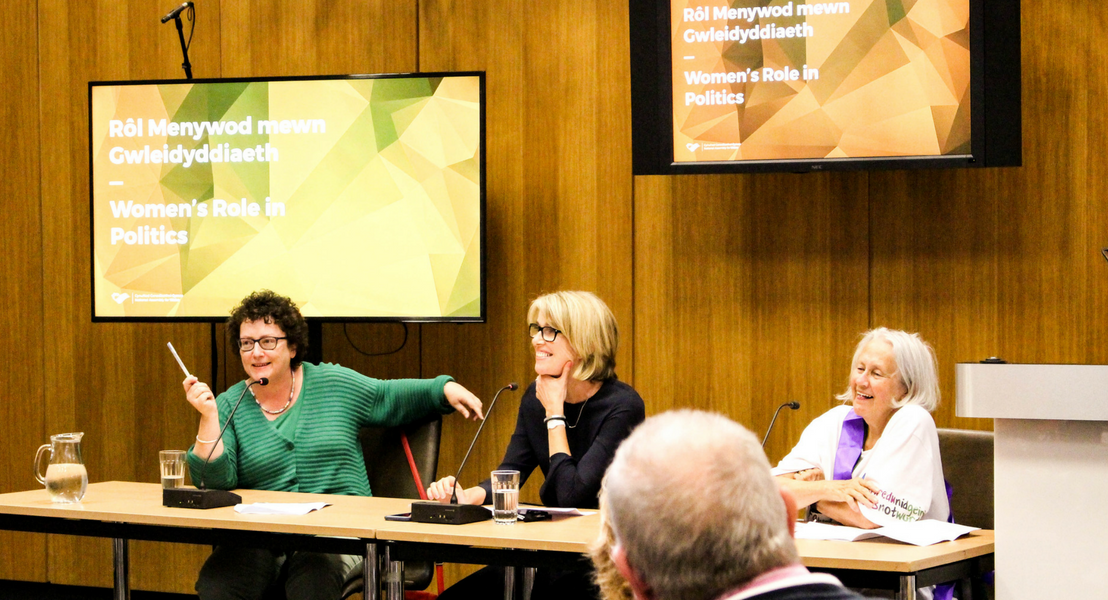 6948 people attended events at the Societies Pavilion during the week.

For non-fluent Welsh speakers the Pierhead became the home of Shw'mae Caerdydd - the centre for information about the Welsh language - for the duration of the festival. Sessions included a discussion about Welsh dialects, alongside workshops from clog dancing to hat making. Friday 10 August saw Llywydd Elin Jones among those honoured by the Gorsedd of the Bards, alongside Welsh rugby international Jamie Roberts and the musician Geraint Jarman, and was presented with the blue robe for her service to the nation. [caption id="attachment_4957" align="alignnone" width="1108"] 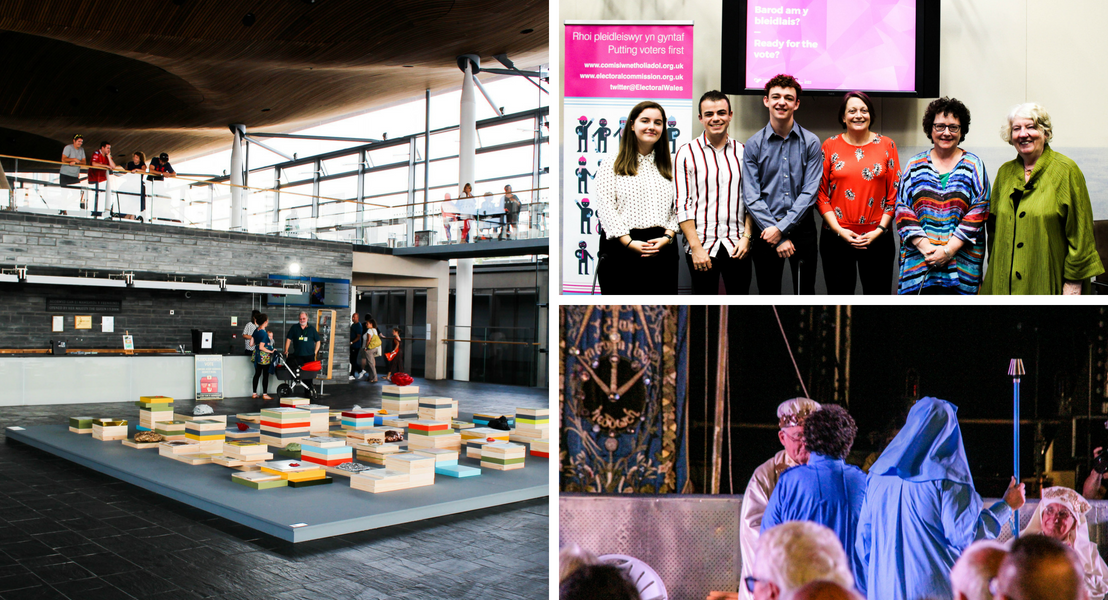 Y Lle Celf at the Senedd, Ready for the vote? panel, Llywydd Elin Jones honoured by Gorsedd of the Bards[/caption] Later in the week there was also the small matter of the homecoming event for Geraint Thomas, celebrating his remarkable achievement in becoming the first ever Welshman to win the Tour de France. Geraint was welcomed by Llywydd Elin Jones at her annual reception at the Eisteddfod, before being greeted by Catrin Heledd, Band Pres Llanreggub, the band Siddi and finally the thousands of excited fans who had congregated on the steps of the Senedd. [caption id="attachment_4961" align="alignnone" width="1108"] 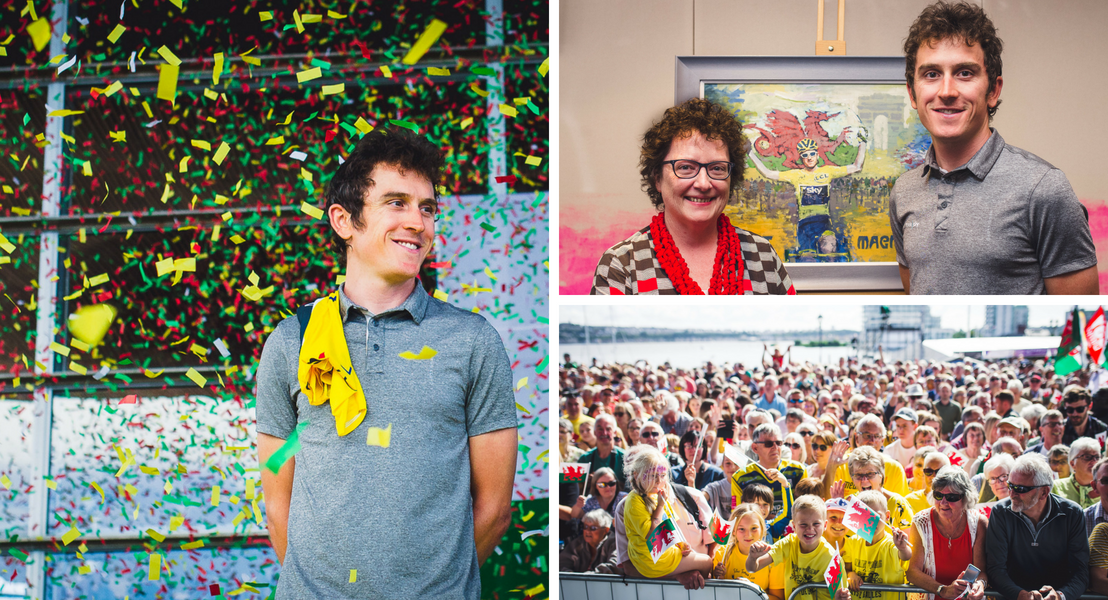 Geraint Thomas at the Senedd[/caption] One of the most popular activities at the Senedd during the week was the chance to visit the Assembly’s debating Chamber, where for the first time visitors were able to have their picture taken in the Llywydd’s seat. Over 5595 people took advantage of this unique opportunity to momentarily assume the role of the Llywydd, and experience what it might be like to oversee debates in the Chamber.

First time in the Senedd chamber. What a treat- and what a way to get more people engaged in what @AssemblyWales does. #Eisteddfod2018 pic.twitter.com/dO9NMw59I9