Sudan meets Wales: What can the Parliament of Sudan learn from the National Assembly for Wales?

Over the last year or so, staff from the National Assembly for Wales have been working in partnership with a social purpose enterprise, Global Partners Governance (GPG), to share best practice with the Parliament of Sudan. As part of this relationship, it was decided that a visit to the National Assembly for Wales would be beneficial for a small delegation of Sudanese MPs and staff. 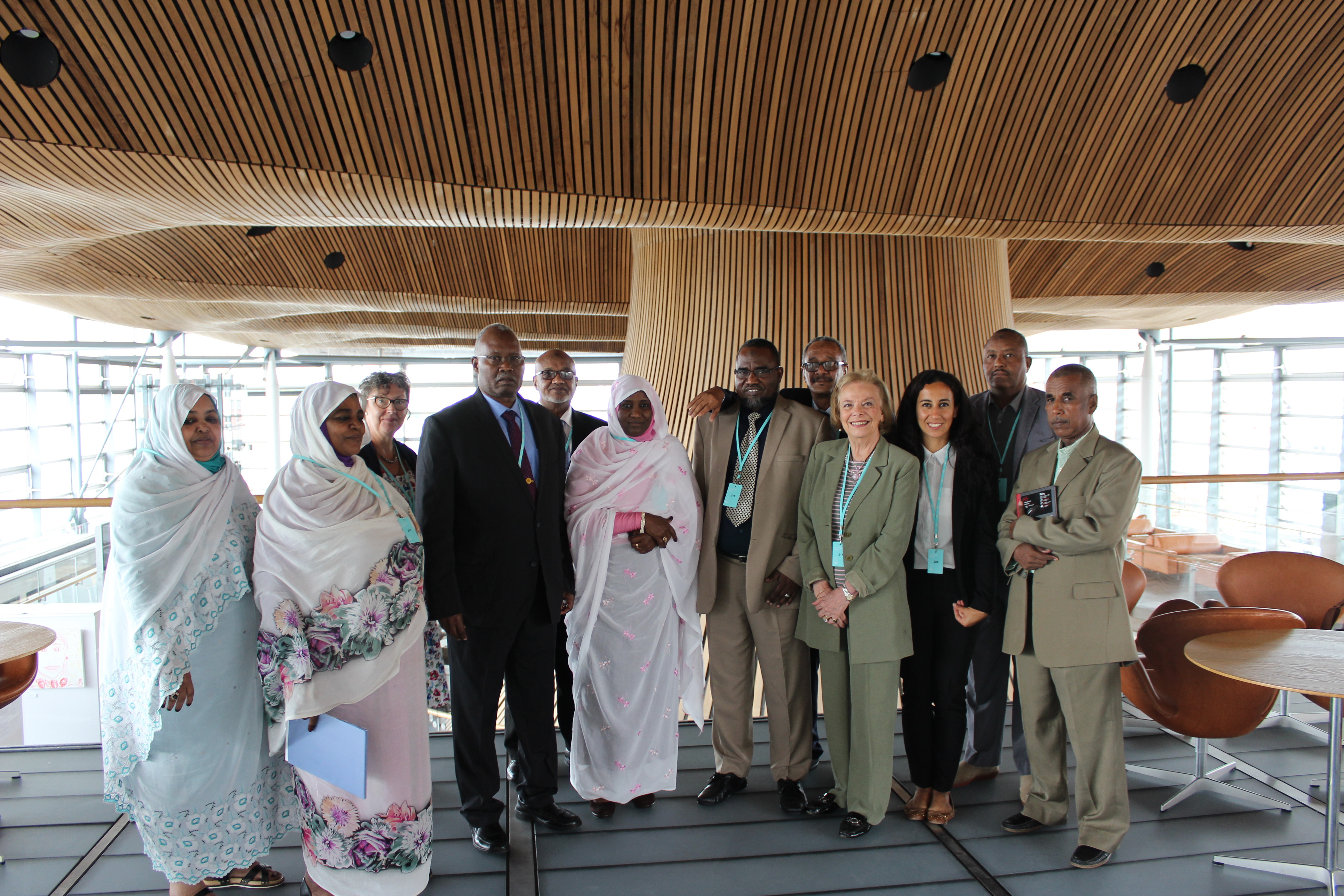 A 1.5 day programme was prepared for the delegates. The programme included sessions on the following subject areas:

Development of the Assembly’s Research Service

This session demonstrated how important public engagement and public perception of the National Assembly for Wales is, and what tools are used to reach out to target audiences.

This was an opportunity to observe an educational visit, and to meet participating school children. The delegation were also given an overview of the Assembly's Youth Engagement Service. A particular interest was shown in getting young people and children involved from an early age.

Further to watching a Committee take place in the Senedd, delegates met with David Rees AM, Chair of the External Affairs and Additional Legislation Committee.

“The discussion with the Sudanese delegates focussed upon the role of the committees in scrutinising government action and policies together with the importance of a strong relationship between committee members and the committee staff which allows the committee to be effective. They were very interested in knowing how we worked as a team to hold the government to account.”

The delegates were surprised to see that Committee meetings at the National Assembly for Wales are open for public viewing, as all Committee business takes place in private at the Parliament of Sudan.

Openness and transparency in the National Assembly for Wales

Finally, the Deputy Presiding Officer, Ann Jones AM led a session that re-emphasised the importance of transparency here in Wales. Delegates were shown how easily the public can access information such as the Record of Proceedings, further highlighting openness at the National Assembly for Wales. 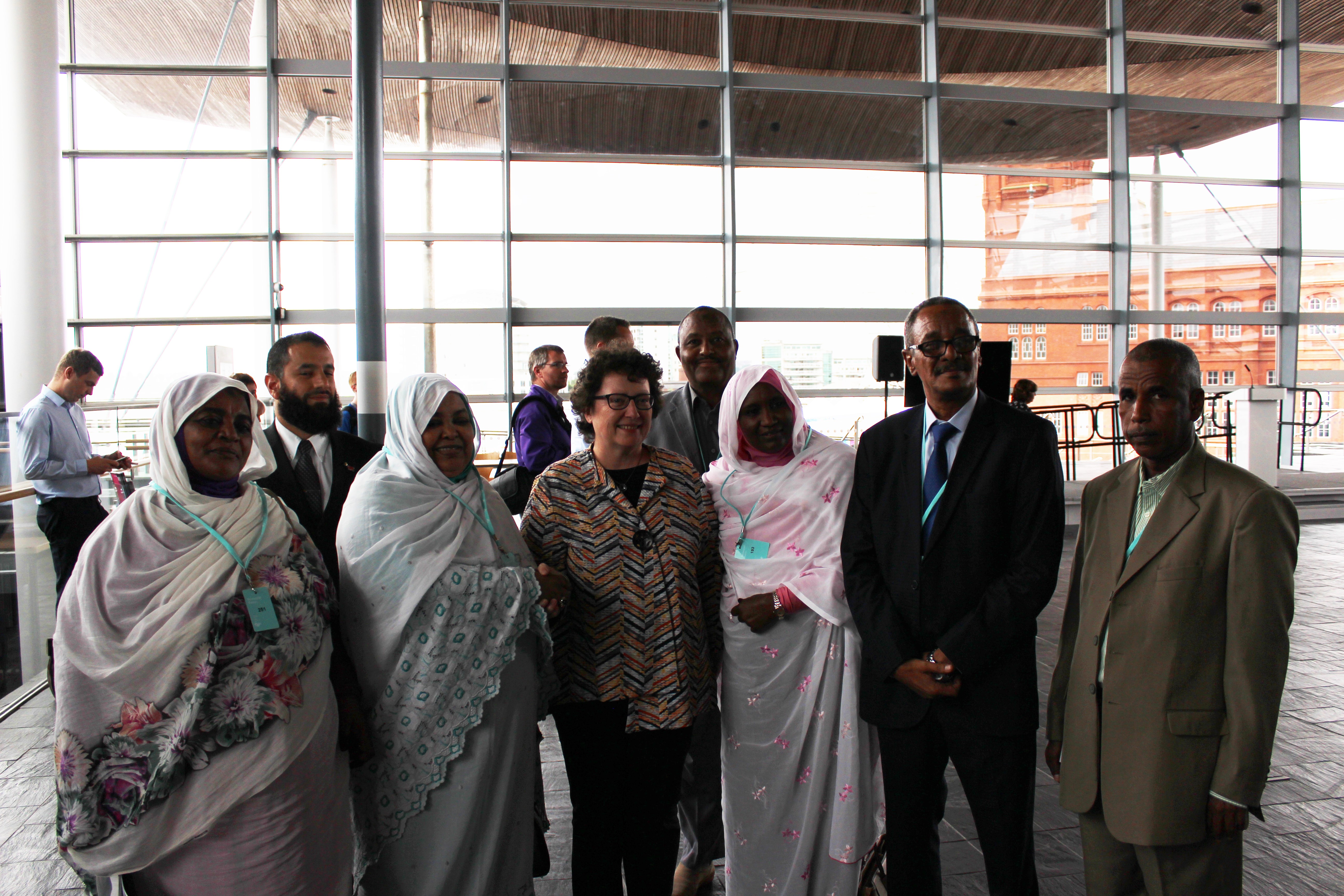 A tour of the Senedd was also enjoyed. After explaining the sustainable nature of the building, it was clear to see that sustainability was of keen interest to the delegation. A group of young musicians called ‘Speelschare’ were playing in the Senedd during the tour. The delegates thoroughly enjoyed the performance and coincidentally bumped into the Llywydd Elin Jones AM, who was also watching the performance. This was a photo opportunity that couldn’t be missed! Following the visit, our GPG contact stated that

Adrian Crompton, Director of Assembly Business was pleased to see the delegation, having already met many of them whilst visiting Sudan in line with his role with GPG.

‘It was fantastic to see my friends from Sudan and for them to benefit from such a great programme. Democracy in Sudan faces unique challenges but also some that are common to parliaments internationally, such as how to engage the public and how to improve the scrutiny of government. I have worked with many parliaments all around the world and all see the Assembly as a model from which to learn. So I’m really looking forward to seeing how the visit has influenced the development of the parliament when I return to Sudan in October.’