Visit from the Scottish Parliament 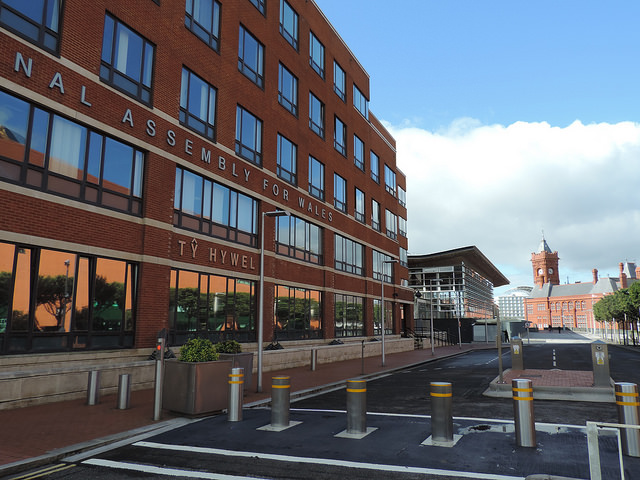 Back in June the Scottish Parliament's Gaelic development officers, Mark and Alasdair, came on a two day visit to learn about the National Assembly for Wales in Cardiff. By Alasdair MacCaluim During our visit we wanted to find out about education, social media, community outreach, translation and the place of the Welsh language at the Assembly. Education Our visit started in Tŷ Hywel with Mari Wyn Gooberman, Head of Education. There is a very special room in this building called Siambr Hywel. This was the Assembly's main debating chamber from 1999 until 2006 when Plenary meetings and committees of the Assembly moved to their new home in the Senedd building next door. When the Assembly Members (AMs) moved out of Siambr Hywel, the youth of Wales moved in. It is now the base for educational visits, giving young people the opportunity to sit in a real debating chamber in a real legislature where they can use voting buttons and microphones just like the AMs themselves. The team work in both languages, delivering sessions both to Welsh and English schools. Like the Scottish Parliament, education sessions are offered in schools throughout Wales as well as at the Assembly. Languages and Powers As part of our trip, we met with many people connected with promoting the Welsh language at the Assembly. We had a meeting with Mair Parry Jones, Head of Translation and Interpretation and Sarah Dafydd, Official Languages Scheme Manager. We learnt that the National Assembly has been very much involved in developing machine translation for Welsh. With this, basic translation is done by computer. The Assembly’s translation team then proofs and corrects the draft to create a finished document. This is a very large, important and innovative project. The Languages Scheme is underpinned by a philosophy that each member of staff has a part to play in the development of Welsh - even if they don't speak any - or much - of the language. Here is a short extract from the scheme's statement of ambition: "Everyone has a right to interact with the Assembly in the official language of their choice. Where there are barriers to this, we will work to remove them so that the Assembly demonstrates a continuous drive towards becoming a truly bilingual institution where Welsh his used and heard". As part of the scheme, all staff have been undertaking Welsh language awareness training. The whole scheme can be read here. At the end of our first day, we had the opportunity to attend a team meeting of the Assembly's Communications Team. This was very interesting as we learnt about the new taxation powers which the National Assembly is to receive through the Wales Bill 2014. 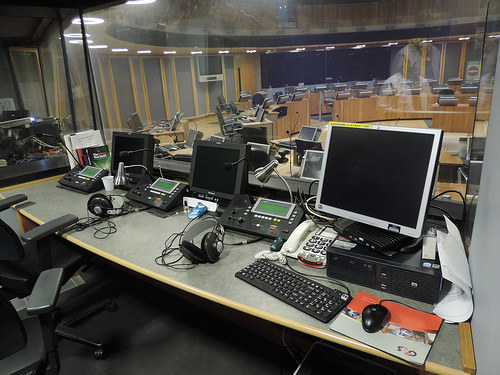 Building, Plenary and Committees On the last day of our visit we were given a tour of the Senedd building by Richard from the Front of House Team, and were given the opportunity to enter the Chamber itself and visit the translation booth. We also saw the committee rooms and the public café and learned that some scenes from Dr Who and Sherlock had been filmed in the Senedd! Later we were able to see the Chamber in action during First Minister’s Questions when we saw the First Minister of Wales, Carwyn Jones AM (Labour) answer questions from the opposition parties. Some questions were in English and others in Welsh. As with the Scottish Parliament, committees play a key role in Assembly business, working closely with the Education and Outreach teams to consult with the public on enquires, including collecting the views of children and young people. We saw some of the videos that the outreach team had made for committee enquiries and we then visited the web and social media team for more information about the National Assembly's online presence. The Assembly, like the Scottish Parliament, has a YouTube channel with many videos, not only about Assembly business but also to promote engagement.  It also has a strong presence on Twitter, Facebook and all posts are bilingual. The Welsh Assembly - like the Scottish Parliament - celebrates its 15th birthday this year and a series of videos have been made called 15 years in 15 seconds! [youtube https://www.youtube.com/watch?v=videoseries?list=PLAiwHW5TKfkHy0HMKN73S9DLXM67bmXFi&w=560&h=315]   Even though we only had two days to learn about 15 years of devolution in Wales, we amassed a great deal of information and a great number of ideas which should be useful to our work in Scotland. Diolch yn fawr Cynulliad Cenedlaethol Cymru! Alasdair’s original blog posts in Gaelic can be read here: http://parlamaidalba.wordpress.com/2014/08/25/cymru/   All photos by Mark and Alasdair