National Assembly for Wales continues progress as an inclusive organisation

​The National Assembly for Wales has taken more positive steps in being an open and inclusive organisation. 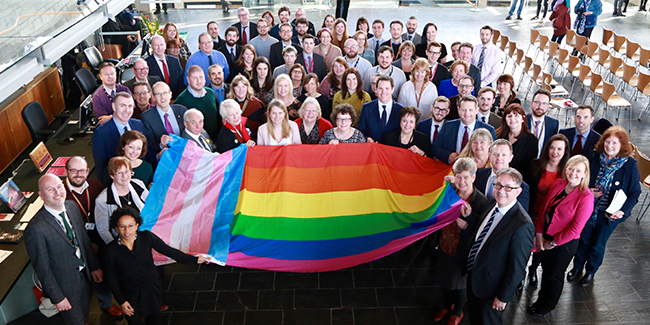 In a year the Assembly was named as the top employer in the UK for LGBT people in the annual Stonewall Workplace index, it also retained its Investors in People gold standard, its National Autistic Society and Action on Hearing Loss Service Excellence Award and was named among the top 30 employers for working families.

“I am proud of the Assembly’s record on diversity and inclusion and that the concepts of fairness, dignity and respect have always been core principles,” said the Llywydd, Elin Jones AM.

“Whilst this report celebrates the work that we have done to be an inclusive organisation, we know that there is always more to do.

“We have not been immune to the distressing incidents which have come to light as a result of the #MeToo and #TimesUp movement.

“We accept our role in this issue and have brought in a number of new measures to empower people to speak out about their experiences at the National Assembly, both now and in the future.”

The National Assembly Commissioner with responsibility for equalities issues, Joyce Watson AM, added:

“We aim to be an exemplar organisation in the way that we support our staff, Assembly Members and the public that we serve.

“I am grateful to our Diversity and Inclusion Team, our workplace networks and to colleagues across the organisation for continuing to make the Assembly an inclusive employer and service provider.”

"I am proud of the Assembly’s record on diversity and inclusion and that the concepts of fairness, dignity and respect have always been core principles"

- Elin Jones AM, Llywydd of the National Assembly for Wales. Highlights of the year:

More information can be found about making complaints under the Assembly’s dignity and respect policy here.